Eric also had his big interest revealed to him in a REVELATION. It may be my greatest pleasure ever in my life to see these to bright young people realize they love things and want to learn more about them.

When he was about 9, I found a copy of the first book from the Harry Potter series at Good Will and bought it on a whim. Eric was never one for fantasy, magic, mystical creatures, etc, but I knew kids were crazy over this series and wondered how he’d feel.

He didn’t start reading it for a few weeks, he accepted it with a weak and disaffected “thank you” and threw it on top of his dresser – it stayed there for weeks until one day he stayed home sick from school. His mom called me to say he hadn’t left his room except to use the bathroom for almost ten hours. When he came out his first question was, “can we go get the second Harry Potter book?” He was hooked immediately

I, of course, hadn’t read the book and didn’t understand the hype but went on a mission to all of the resale and second-hand bookstores I knew of and assembled the whole series. I’m not merely bragging when I say that this child read the whole series within a month. It’s all he talked about, it’s all he referenced, he was consumed by it.

He was Harry Potter for Halloween and it was the actual curtest thing I’ve ever seen. I’m waiting for him to convince Stephanie to read but she’s much more of an outside, feeling, nature kid than a reader so it may take her some time to get there. And he may also just want it to be his special thing now, like her with the gemstones.

Plus – I’m using all sorts of fun patterns to make him capes and dress robes!

I trust the public schools and I trust my kid and their spouse, but I also feel a grandparental duty to help the kids learn new interests. While I hear them reciting state capitols, multiplication tables, American History, etc, I seldom hear them excited about a new area of learning.

It took a long time and lots of searching to find each kid an exciting field – but we got there. One day on a trip to the Field Museum, Stephanie (at about the age of 7) became entranced by the gem hall. It’s hard not to be dazzled by the sparkles, but she was interested in a deeper way. She wanted to know where the stones come from, what they’re used for, what they’re for and who wears them, etc.

Despite being in a literal hall of lit up gems, the brightest element in the room was Stephanie’s eyes. I noticed immediately and kept Eric busy for TWO HOURS while she made her way through the gem hall.

Ever since then, I’ve found ways to sneakily encourage the continued digging (wink) into the field. I found her an at-home gem kit, books about gems, and she has a very cute bedside collection of crystals.

I’ll note – we make a point to discuss the genesis of gems, where they come from, who works to dig them out, and some of the woo woo powers they are believed to possess. We shy away from discussing jewelry and the class structures relating to gems and gold – that’s a conversation for when she’s a little older but we at least want to build the foundation for those discussions so that she understands all that goes into what ultimately can become a fashion and status symbol.

One aspect to spending lots of time with the kiddos is coming to terms with their unrelenting honesty. Kids just haven’t yet learned the nuance of white lies or neglecting to announce uncomfortable truths. They’re not afraid to tell me that my clothes are “old lady clothes” or my hair is “silver” or when I have a little mustache. Sometimes it’s charming, sometimes it’s less charming.

Recently Stephanie asked me why I’m always weepy – now I’ve been having some dry and teary eye issues lately and really thought it was just a me-problem. Realizing that even my 9-year old granddaughter noticed caused me to start doing some research about the condition.

I stumbled upon Theralife and have some options for dealing with an uncomfortable and unattractive condition. So, damn, I guess that childish honesty serves a purpose?

I’m trying to teach my grandkids about doing good – not doing well in school or sports – but doing good in the world. Philanthropy has often been associated with big donors, galas, fundraisers, and money. I don’t think that doing good has to have anything to do with money and I’m trying to teach these kiddos that they can improve their communities and environments using their bodies and their brains, neither of which takes money or power.

Working with philanthropists has opened my eyes to different ways of navigating ones talent and helping them to use it for good. He mostly focuses on older folks, millennials and Gen Zers, but

it’s never too early to plant the seed of civic and environmental engagement.

I understand that eventually in their lives, my grandbabies may want to do more financial philanthropic work or join the Peace Corps or foster children – but as kids, it’s fun to do simpler projects like bring a trash bag on a river kayak trip and pick up trash, plant gardens in public spaces, volunteer at an animal shelter, etc.

One day a week, I pick the kids up from school to bring them home while their mom pulls a double shift. It’s so universally great – I get time with the kids, mom gets to put in extra hours at work, and the kids join me at a fresh, local grocer in the area.

When I was a kid, I never felt like I had a relationship to my food, where it came from, or what it meant/cost. It just appeared, as if by magic, in the cupboards and it was mostly preserved non-perishable food items. The grandkids, and their mom, are committed to healthy and responsible eating – in order to help the kids understand why that’s important, I Take them with on the weekly grocery run. My daughter works really hard and maintains a beautiful home and is raising two really smart, kind children. The least I can do is their grocery runs!

So we split the list into three sections: fresh produce, dried materials, and dairy. We alternate who gets what each week and we compete to get the lowest price. We spend about $150 each week, it lasts them until the next week, and the kids help with the weeks worth of meal planning – for themselves and their mother.

Now when they grab a piece of fruit or a snack, they are more connected to where it came from and what it cost, and they get to feel proud of their participation in the procuring of the home’s foods.

I’m not always in the mood to go out and meet the kids. Luckily, on days when I’m feeling tired or in pain, I can join the kids on a technology date. Basically, this usually just means having them FaceTime me from places I wish I was.

I don’t love it, but it definitely keeps me in their lives and makes me feel a little more involved in their learning and growing.

Botanical gardens and greenhouses are another great day adventure with the kids. They have room to run around, it’s either outdoors or gives the winter illusion of outdoors, and they get to learn.

It’s also easy to try to weave some geography lessons into a botanical garden visit – the kids are coming into contact with plants they’ve never seen in their lives before. I like these little glimmers of “the world is bigger than I thought” when it shows through. 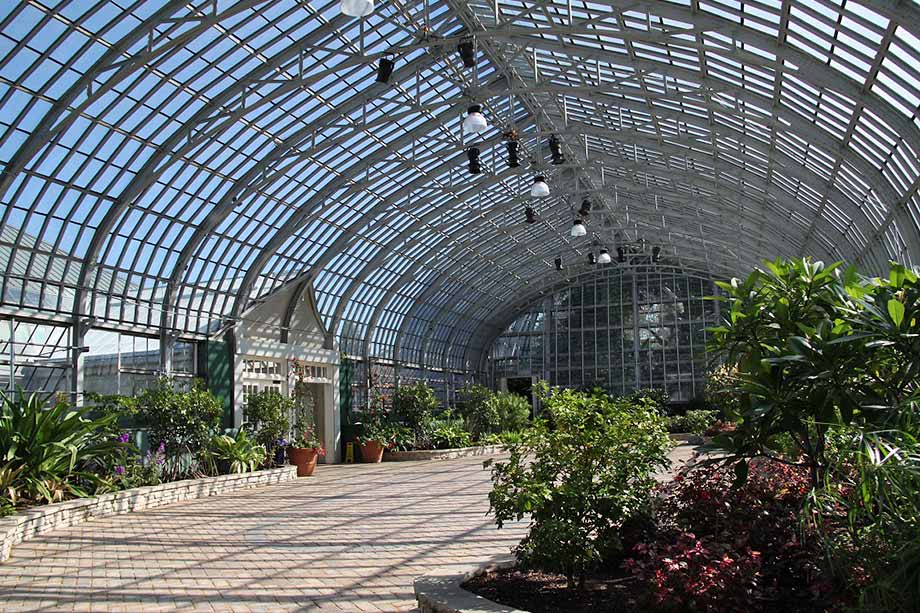 Most cities have some sort of free city gardens or farms. I suggest, even if not, looking for free days or events. Once I took my two grandkids to a “goat yoga” at a botanical garden nearby and it was a laugh riot!

It’s hard to “debrief” after a visit to a museum or garden without it feeling like I’m quizzing the kids on what they read, retained, and memorized, so I try to talk about my favorite parts and hope it inspires them to do the same.

Part of the challenge in finding something to do with my grandkids is the wide disparity in ability. These kids need room to run and burn off energy and I need a place to take breaks nearby.

This is why I like museums so much. My family and I are fortunate to live near Chicago, home to so many museums, so many of which have frequent free days. So once every other month, the kids play hooky from school (with their parents ok) and I take them into the city. We ride the Union Pacific North south into the city and get off at Ogilvie Station. From here, we’re only a short walk, train ride, or cab fare to whichever museum we’re after.

The Museum of Science and Industry is great because it’s very participatory, so the kids stay busy while they learn about coal mines, oceans or a real submarine. Sometimes we all enter together, stay in a group, and have a live narrative during the visit. Sometimes one of us will break off and meet back up later. And sometimes we get tickets, set a meeting point, and go off on our own.

We always follow museum with lunch so that the kids can debrief me on what they learned, what they liked, what they didn’t like, and how they felt in the museum. It tickles me to hear what they remember or loved.

Train trips are a great way to spend time with grandchildren – it’s structured and scheduled, there are fun stops along the way, and you don’t have to worry about driving. I recently took my two grandchildren – Eric (11) and Stephanie (9) – on a 4-day Colorado train tour. We met at the Chicago Union Station and boarded the California Zephyr for a 2:00pm departure to Denver

We paid up a little bit for a bedroom to share because I wanted the kids to have a little bit more privacy than offered in the reclining coach seats and everyone was given 2-3 hours alone in the room if needed. We spent most evenings siting together in the lounge car watching the scenery pass.

We woke up to a view of the Rockies – pulling into Denver just after 7. We spent the day at Rocky Mountain National Park. We then checked into a hotel where the three of us had a suite. The next day we spent at the Garden of the Gods and Georgetown Loop. The Georgetown Loop Railway was so much fun – a narrow gauge train traversed the true wild! The kids were simply gleeful about it!

All this and we still had the train trip back to Chicago to look forward to. This was a great trip, the kids had so much fun. When we weren’t playing cards or other games, they were reading or just gazing out the window.

I highly suggest this kind of trip just for the bonding and togetherness of it.